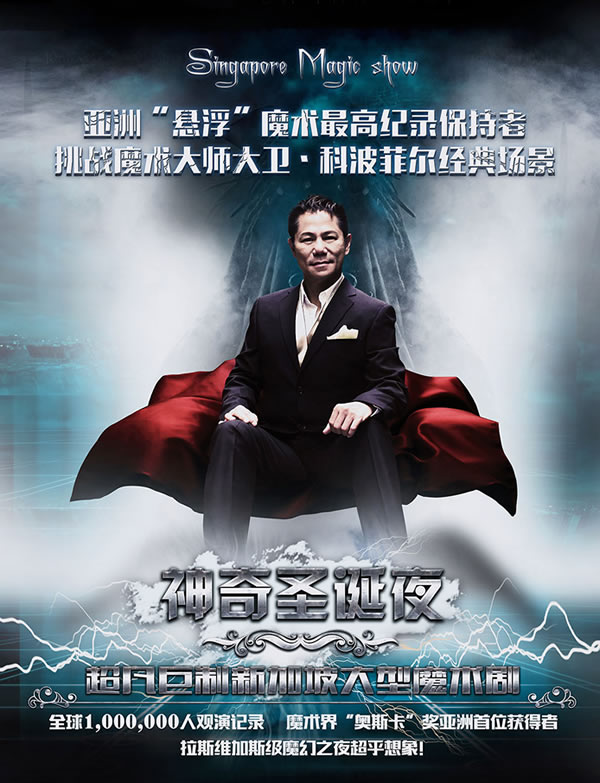 Rounding off its Asia tour, Christmas Magic headed to China to make its debut in the cities of Shenzhen, Guangzhou and Dongguan. This three-city tour marked the first project under Gateway Entertainment (GE)’s collaboration with China’s Juooo Theatre Management, setting the stage to bring future productions into more cities across China. 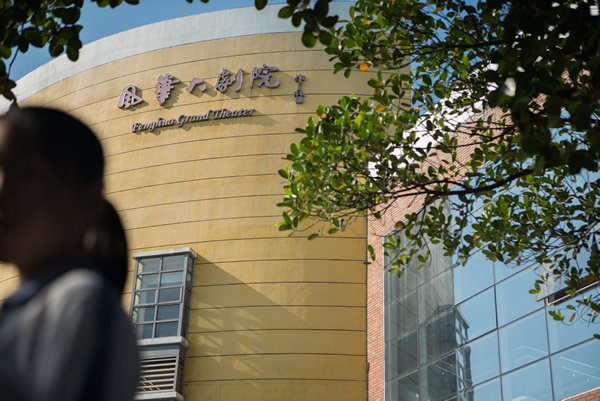 The bustling city of Shenzhen was Christmas Magic’s first stop where it was staged at the Fenghua Grand Theatre. Amidst difficult situations due to different working styles, cultures and even delays at China’s customs, the show’s large and intricate stage and props were finally ready for opening night, much to the relief of both cast and crew.

As its first outing was a commercially ticketed show, Christmas Magic was well received - especially with GE’s business counterparts who were thoroughly impressed with the quality of the show. They felt the show was truly a unique production that stood out among the rest of the other shows staged in China, and were keen on bringing the show back in 2017. More importantly, they felt Christmas Magic’s message of faith, hope and love was a simple yet powerful message that had strong mass appeal - once again illustrating the show’s defining trait of being able to bring Kingdom values in a natural, non-imposing or threatening way. 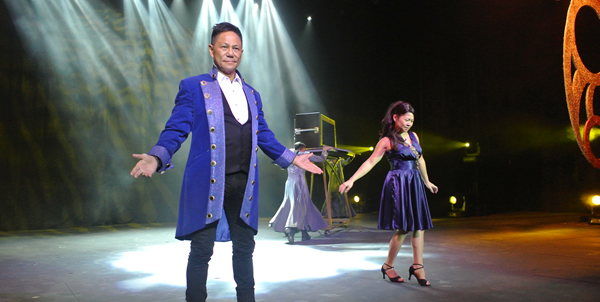 Besides the illusions that kept the audience at the edge of their seats, many of the audience said they were impressed by the showmanship and stage presence of the two main stars. In all, despite venturing into unchartered waters and a competitive market, GE’s efforts to mount this production in Shenzhen bore fruit, with more than 3,000 tickets being issued in Shenzhen for all three shows. 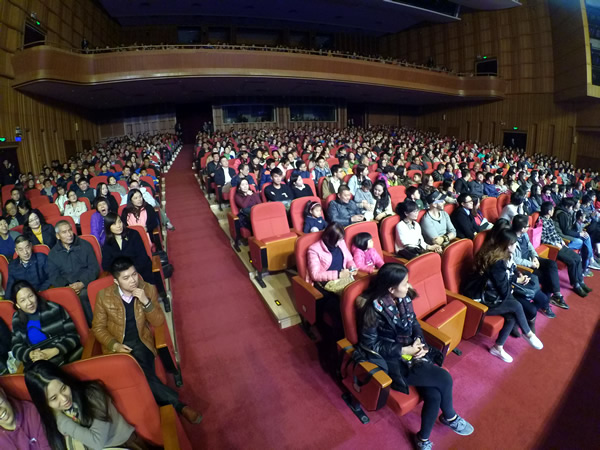 Dubbed as China’s ‘Los Angeles’ and often considered one of the most prosperous cities in the country, Guangzhou was Christmas Magic’s second city of calling. Currently the third largest city in China, Guangzhou’s unique cultural flavour is a heady mix of the familiar and exotic with its long and colourful history filled with the west and western ideas. No stranger to the Arts with its signature Cantonese opera being a trademark of the city’s heritage, the city’s appreciation and demand for the Arts has grown over the years.

The Guangzhou Friendship Theatre was the venue for Christmas Magic’s debut outing in the city. Known for their staging of a wide spectrum of performances - from traditional Chinese opera and dramas to world class international concerts and performances, this 1,300-seater multi-functional theatre has played host to some of the world’s best international acts, such as the Royal British Ballet.

While most of us were spending Christmas Day with families and loved ones, the Christmas Magic team was hard at work unloading props and sets from the containers. Everyone was under a tight timeline and racing against the clock to have everything unloaded and set up. Special care was taken to account for every piece of equipment and prop as a missing piece could spell disaster for the whole production, and severely affect the overall presentation of the show. But throughout the trip, we were truly blessed to have a dedicated and diligent production crew who stayed sharp throughout all the shows - especially during set-up and teardown. Working till the wee hours of the morning is all part and parcel of a touring show, but everyone remained in good spirits, despite the grueling hours and difficult working conditions.

As with most shows, dealing with delays and unexpected incidences is usually the norm - especially when working in new and unfamiliar surroundings. And when it comes to a production such as Christmas Magic that involves complex stagecraft, large props, dance choreography and illusion, every component of the stage has to be perfect and fault-free. As such, the crew had to spend a good amount of time before rehearsals checking and even re-laying several stage floorboards that were unevenly laid. The team also had to deal with a wireless inter-communications system issue, which was crucial to the smooth running of the entire production. Fortunately, the quick thinking crew quickly improvised to prevent further delays, and used their own walkie-talkies as their backup communication system.

To thank the crew for their hard work, Senior Pastors Lawrence and Nina, and Priscilla hosted a surprise Christmas dinner for everyone to celebrate the festive season away from home. It was a good short break for everyone to enjoy good food, fellowship and fun with the GE family.

Overall, we had a good turnout for all shows in Guangzhou, especially on opening night. We played to a packed hall every night, and more than 2,200 tickets were issued for all the shows in Guangzhou. The audience who responded enthusiastically throughout the entire performance, with many vocally showing their support and approval after each illusion, kept the atmosphere buzzing and lively. Of noteworthy mention were the well-trained local ushers who helped ensure and maintain an orderly and conducive environment for everyone to enjoy the show.

We received encouraging feedback from the local pastors who shared that Senior Pastor Lawrence’s message was not only concise, but powerful and timely for the city and the nation. They were particularly impressed with how he explained and presented ‘the light of heaven’ in such an engaging and story-like manner. Many of them also shared that the show was well-paced, exciting and had many moments that took them by surprise. One of the VIP guests who attended with his wife said he was impressed by how professional the production was, and lauded GE’s cast and crew for making such a show possible in China.

Some other guests we spoke to also said they had new found respect for Senior Pastor Lawrence for doing so many shows back to back amidst a hectic schedule, as well as running his own church alongside many other duties. They added that they were truly glad to have been able to witness this magical spectacle, and looked forward to GE bringing their brand of magic back to Guangzhou again in 2017.

The third and final stop for Christmas Magic’s inaugural tour of China was the industrial city of Dongguan, where the show was slated for a one-night performance. It also was the tightest set-up schedule to date, where everything had to be set-up and ready in just a day. Fortunately, the theatre bay was large enough to accommodate the large sets, facilitating the easy unloading of all our cargo.

There were hurdles that once again threatened to cast a dark cloud over the production, but were thankfully averted when everyone adapted and pitched in to deal with these issues quickly and professionally. One of the crew even stepped up to take on a new role to manage one of the follow spot-lights. With just one show in Dongguan, everyone was committed and determined to end off the tour on a strong note, and focused all their efforts into making a memorable grand finale for Christmas Magic. 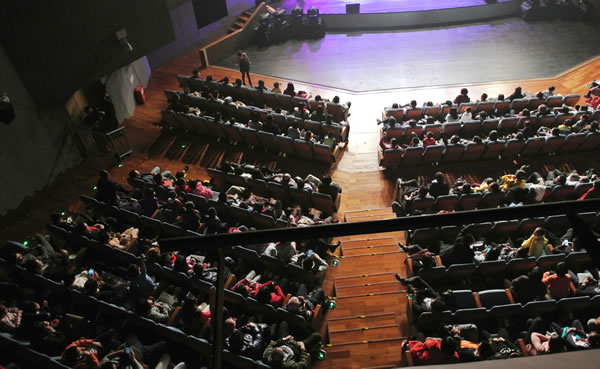 And a grand finale it was! More than 700 people from all over Dongguan came to witness the magical spectacle and see the stars in action. The excitement and enthusiasm spilled over even after the show was over, where the stars and members of the Khong family were greeted by eager throngs who clamoured to meet them in person and capture the moment with their cameras. 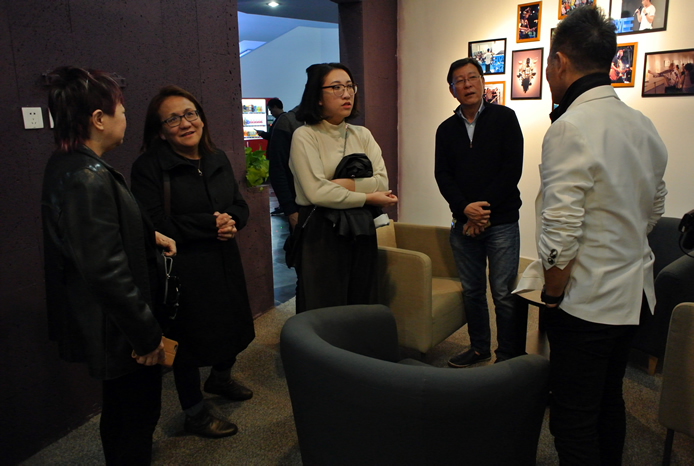 Among the audience were also our own FCBC members who were in the city and came to show their support for Senior Pastor Lawrence, and more importantly, his vision and work in China through Gateway Productions. We were glad to hear positive feedback from them, and that they were proud of GE’s efforts to bring the Christmas message to this part of China.

“Our FCBC members are GE’s biggest and most important stakeholders,” said Senior Pastor Lawrence. “To receive their prayers, encouragement and support from them means a great deal to us, and also means they stand together as one to fulfill God’s mandate for GE!”

Several other VIPs and pastors who attended the show also lauded the show’s production standards, and were eager for Senior Pastor Lawrence to bring Christmas Magic back to China again in 2017 so that even more people can have the opportunity to catch such an inspiring and world class performance.

As with all GE productions, each show staged is testament to the company’s endeavour to create unforgettable experiences that will be remembered long after the curtain closes. Christmas Magic has come a long way since its first debut at Singapore EXPO in December 2010, and has evolved to become a commercially viable product that we are proud of, and that is worthy to be showcased on the international stage. To tour three Chinese cities and bring the message of faith, hope and love through this production is a new milestone for both GE and FCBC, and we look forward to bringing it to even more cities in China in 2017, and also to Thailand in October.